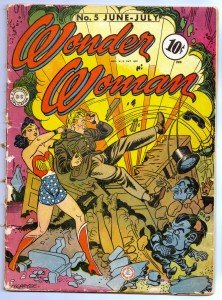 Within the great halls in the pantheon of American cultural comic icons there are just four seats upon which rest the weary, yet still resilient and proud bodies of surviving superheroes.   Superman, Batman, Captain America and Wonder Woman.

The only remaining members of what was once a populated cosmos previously inhabited by hundreds of imagined beings gifted with various levels of crime and enemy fighting prowess hidden behind an assortment of colorful costumes.  Spawned from the minds of artists, scriptwriters and publishers seeking to capture the imaginations of a war gripped and depression strained public, just four champions of the cause remain front and center today.  Great-grandparents to a now billion dollar industry, the names of which children can still recognize and recite origins and abilities.  And within that small, elite group sits just one female, a woman of wonder. If one was to describe reality in a comic book context, they could pit two psychologists against each other.  One, the eccentric yet well-intentioned genius seeking to uncover truth while maintaining a benevolent approach in his attempts to persuade mankind.  The other, manipulative and political, is able to build on human fears to sway the public by twisting facts and fomenting panic, turning seemingly rational human beings into mobs.

This fanciful description could in fact represent on one side psychologist Dr. William Moulton Marston (creator and author of Wonder Woman from inception (All-Star Comics #8 December 1941) until death in 1947).  On the other side stood psychologist Dr. Fredric Wertham, author of the 1954 bestseller The Seduction of the Innocent. The two men had very contrasting views around human behavior, an ideal society, comic books and media, censorship, feminism, sexuality and yes, even bondage.  Suffice to say in a room together the two men likely would have had a healthy and heated discussion.

Humans always seem to want to apply a cause to each and every action – particularly psychologists.  Both men observing the same realities in the world came to very different theories and took very different paths in acting upon those different perspectives.  Yet curiously both paths, perhaps inevitably and poetically, led to the same destination; comics and Wonder Woman. 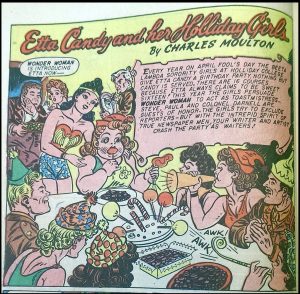 In the short term, Wertham’s victory was won with support of a population already quite willing to sacrifice comic books, having by now turned to television as its primary entertainment media.  But given Wonder Woman’s resilience through the decades; be it in comics, cartoons, television in the 70’s or her renaissance in Hollywood movies, a vindicated Moulton ultimately emerged with the upper hand.

In issue #5 writer Moulton and artist H.G. Peter both actually appear in the first panel of the second story (The Toothache) as waiters and are identified in the opening caption box.