Nyoka the Jungle Girl #13* on the right, from Fawcett, was published November 1947. It is one of my first books after having “come back” to Golden Age comic book collecting. There is something rather imperceptible about the cover that I like, the colors, the angles, the whip? The cover artist is listed as unknown (GCD), but my other favorite Nyoka cover (the prior issue #12 on the left) is credited to Bert Whitman (of Debbie Dean fame). I’d hazard a guess both #12* and #13* are by the same artist.

Like so many comics (hence these posts and this web site) there is an entire story behind the cover – and I mean outside of the comic book itself. For one, Nyoka was the creation of Edgar Rice Burroughs. She debuted in “The Land of Hidden Men,” published in the magazine Blue Book. Burroughs then expanded the story into the novel “The Jungle Girl” in 1932. Unlike his long running Tarzan and John Carter, that was Burroughs’ last work with Nyoka. 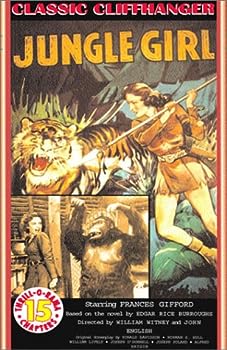 But it wasn’t the end of Nyoka.  Republic studios would pick her up for a movie serial The Jungle Girl in 1941. A second serial, The Perils of Nyoka followed. Enter Fawcett and comics, where Nyoka’s first comic issue was a one-shot to support the movie. It wasn’t until three years later that Fawcett picked her up for an additional comic run of 76 issues – all the way until 1953.

Interestingly, from issue #30 (April 1949) the covers were photo covers, giving the appearance of filming on a Hollywood movie set.  Yet that’s not a Hollywood starlet playing Nyoka but rather, according to Fawcett comic book editor Virginia A “Ginny” Provisiero, the photo covers were staged and photographed through a New York modeling agency.