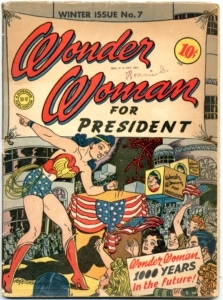 Today (Sunday, October 21, 2018) is marked by D.C. Comics as the Day of Wonder: Wonder Woman’s birthday that now makes her officially 77 years old.

“This Sunday, October 21, on the day of her very first appearance in All Star Comics #8, we’re honoring Diana with a Day of Wonder.”

A perfect time to post my copy of Wonder Woman #7.  The classic “Wonder Woman for President” cover went on sale to the public November 13th, 1943.

I’ve written about how Wonder Woman is the sole surviving female superhero of the early Golden Age and about the stark contrast between Wonder Woman’s real life psychologist creator and his contemporary psychologist anti-comic crusader.

I’ve also written about how Wonder Woman stood behind fellow Justice League member Hawkman during his May 1943 “We are ALL Americans speech” in All Star Comics #16.

“We are ALL Americans, regardless of race, creed or religion, and the enemies are Hitler, Mussolini and Tojo, and together we can defeat that enemy!”

Being a founding member of the Justice League and honing her speech writing skills apprenticing under Hawkman no doubt formed a solid base from which to launch a run for the nation’s highest office.  Being “beautiful as Aphrodite, wise as Athena, strong as Hercules, and swift as Hermes” probably didn’t hurt the campaign either!

As the story goes, Diana “Princess of the Amazons” aka Wonder Woman visited Paradise Island to participate in the annual harvest festival. During the event, Princess Diana of Themyscira, Daughter of Hippolyta (aka Wonder Woman) is shown the future through the Magic Sphere by her mother. What she sees is the United States of America in 3000 A.D. 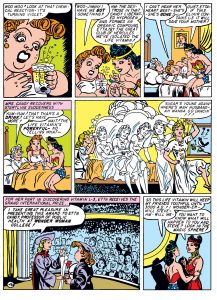 The “L-3” vitamin invented by character Etta Candy back in the 20th century allowed people to stop aging after their mid-thirties. This conveniently facilitated the survival of Wonder Woman’s boyfriend Steven Rockwell Trevor (aka Steve) all the way to the year 3000.

By that time, the United States of America had elected its first female President, Arda Moore. Under her successful leadership, the country routed out government corruption and jailed an evil politician aptly named Grafton Patronage.

Diana was able to change into Wonder Woman and escape. Along with Etta, the pair slipped a L-3 antidote into the prison’s water supply and, once drunken, immediately aged the rebellious Patronage and his conspirators to ashes. With President Moore freed things could continue on happily – that is at least until the next election cycle. 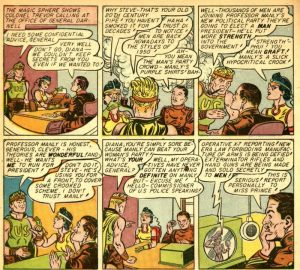 Both parties launch vigorous campaigns, but on election night Professor Manly colludes with malevolent associates to rig the election – forging a win for the Man’s World Party. Steve realizes he is an illegitimate President and refuses to be complicit in the corrupt scheme. Professor Manly has Steve “done away with” and assumes the role of President. 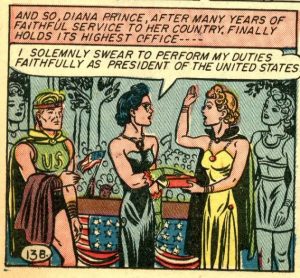 As Wonder Woman, Diana infiltrates the headquarters of the Man’s World Party where the Professor is keeping Steve in hiding. In the ensuing battle Steve is saved.  Manly’s crimes are exposed, Steve’s transgressions are forgiven and Wonder Woman is dutifully sworn in as the rightful President of the United States.