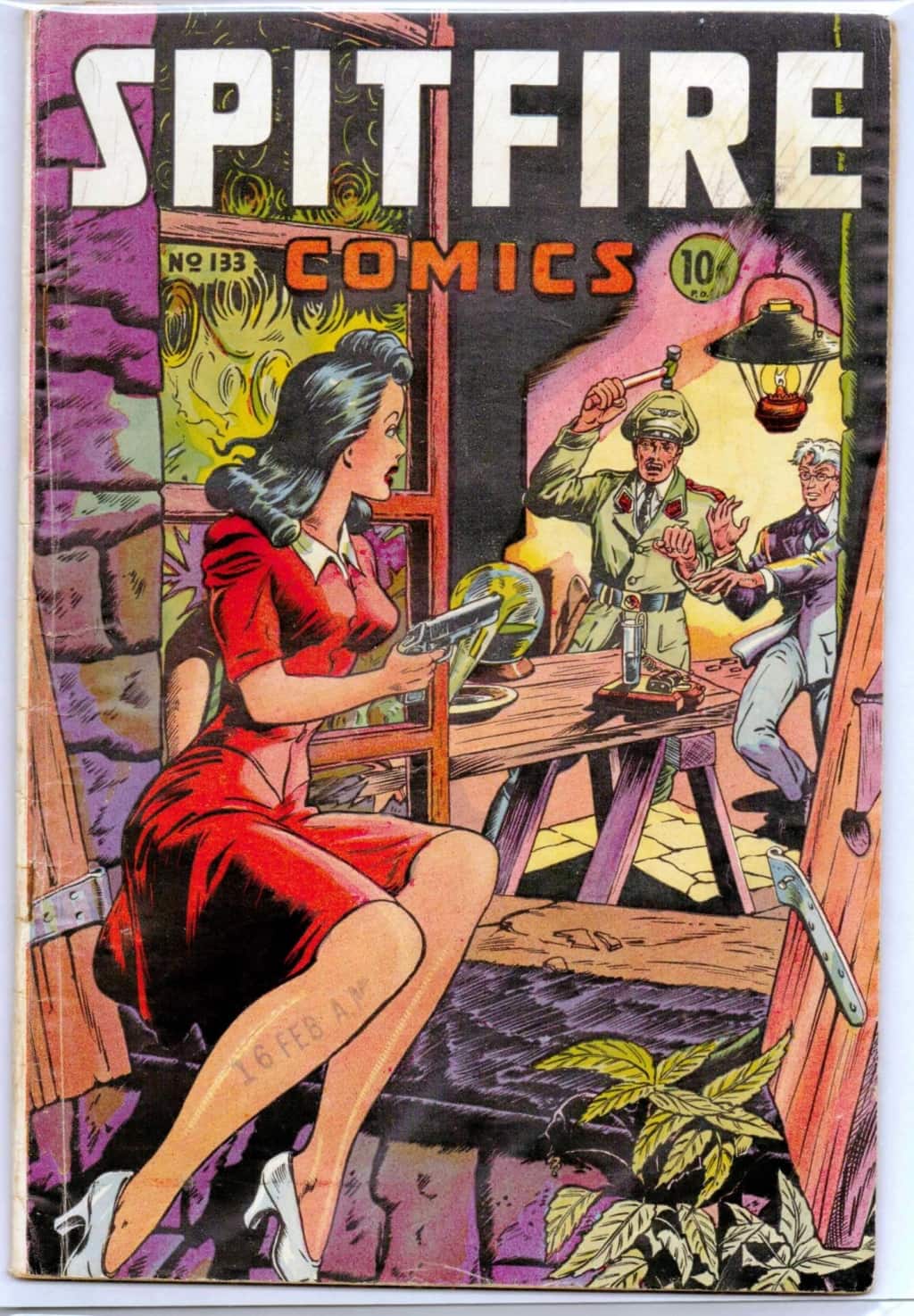 I’m not a lawyer, nor am I able to spend hours traveling between small libraries researching corporate comic book entities and structures from the early 1940’s.

But even the cursory Golden Age collector will note there were clearly a number of small time comic publishers during that era – either seeking to make a fortune in a burgeoning industry or created to take advantage of wartime paper rationing loop-holes (or both). I imagine work untangling the details might be like investigating modern day “offshore” businesses. Such is the case with Elliot Publishing Company, the publisher of the only two issues of Spitfire Comics (both in 1944) as well as two other titles; Bomber Comics in 1944 and Double-Up Comics or Double Comics in 1940-1944.

The Malverne Herald, a community newspaper located on the Southwestern tip of Long Island New York, is the company listed as the “indicia publisher” on Spitfire Comics. The indicia or colophon publisher (a legal requirement covered in the small print usually on the first page) represents the official company who published the book, as opposed to an informal but commonly used name or publisher group (aka Elliot Publishing Company).  Details of the specifics behind a Malverne connection are unclear but likely was the result of an agreement between parties in order to purchase paper allotments (a method by which a publisher could bypass paper rationing). What is more certain is that Elliot Publishing Company was closely related to two other comic publishing groups, Gilberton and Farrell.

Double Comics or Double Up had an interesting business model.  These comics took two unsold, remaindered comic issues from a whole host of publishers and rebound them into a “new” comic package. Each cover featured a different character (who did not always appear in the inside stories). In the case of Double Comics, the indicia publisher is Elliot Publishing Company – one time employer to Albert L. Kanter (co-founder of Gilberton and the Classic Comics/Classics Illustrated series).

Classic Comics/Classics Illustrated also used the indicia of Elliot Publishing Company in its first three issues. During that time Elliot and Classics Comics shared the same office location.   William B. Jones, Jr., author of Classics Illustrated: A Cultural History, calls Classic Comics “nominally an Elliot operation until Spring of 1942.”  At that point Albert L. Kanter expanded with business partners into a new location and name – Gilberton. Further evidence of the Gilberton/Elliot ties are buried right inside this issue of Spitfire Comics. The one page inside story story titled “Boy!! Whatta story!!” featuring Private Reginald Rookie was scripted by Hal Kanter (signed). Hal Kanter is the son of Albert L. Kanter. Hal was likely honing his writing skills as he would go  on to become a famous Hollywood screenwriter (and executive producer of a hit TV series in the 70’s).  It was through Hal’s Hollywood connections Classics Illustrated obtained comic-book rights to The Ten Commandments (1956) and The Buccaneer (1958). It is also worthy of note that Robert W. Farrell of Farrell Publications was co-owner of Elliot Publishing Company.  This takes us again back inside this issue of Spitfire Comics. The title character is actually a female hero and pilot (like Flyin’ Jenny or Valkyrie) named “Spitfire” Sanders. The lady pilot fighting evil axis artwork is credited to Paul Cooper. Paul Cooper worked in the 1940s at the Jerry Iger‘s studio – a comic packager closely associated with Farrell. In addition to packaging art for Farrell, Jerry Iger was Farrell’s art director from 1955–1957. Further, Ruth A. Roche (a Jerry Iger business partner) is listed as Spitfire Comics’ editor.  In 1945 the Jerry Iger Shop also began producing Classic Comics beginning with #23 .

In the end we have close business relationships between Elliot Publishing Company, Robert Farrell,  Albert L. Kanter, Jerry  Iger and perhaps even the owners of the Malverne Herald. One can further speculate the printing presses at the Malverne Herald might have been used to actually print or re-package the comics. All the information creates an interesting “reality” backstory behind what is a long forgotten, obscure female aviator protagonist who fought America’s war time enemies named “Spitfire” Sanders.