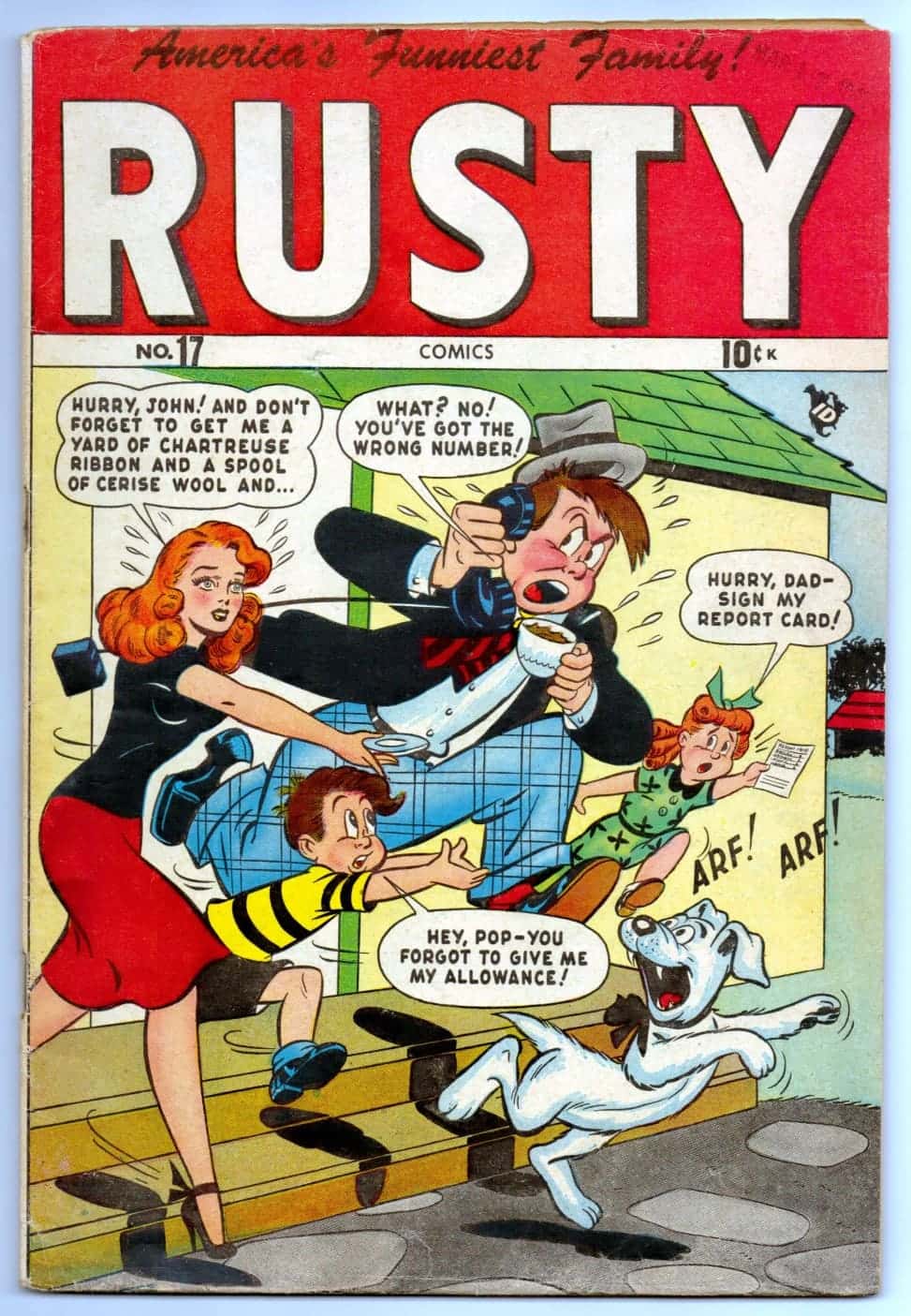 With a powerhouse publishing brand like Marvel Comics and an iconic editor like Stan Lee it is amazing they produced a comic book series about which so little information is available. Rusty Comics even appears to be misunderstood by industry go-to resource The Standard Catalog of Comic Books. They note “Rusty was another in the stable of nearly-interchangeable teen humor comics published by Marvel in the 1940s and 1950s…Redheaded heartthrob Rusty spends her days planning how to manipulate her boyfriends and foil her jealous female rivals while contriving to appear in all manner of slinky dresses and lingerie.” True, a “that day on the newsstand” search for publisher Marvel in 1947 illustrates a genre dominating litany of teen humor books (even a series titled Teen) with both guy and girl lead characters. There were also a fair share of adult “working gal” humor titles. But what The Standard Catalog of Comic Books seems to have missed is that Rusty is actually married to husband Johnny Rumple, with whom she has two children, Junior and [  ]. The series even changes to “Rusty and her Family” on issue #22 (numbering had continued from Kid Movie Komics #11). Admittedly, the comic book industry doesn’t appear to have a label for the sub-genre of family humor, probably made most famous in comics by the long running Blondie (and also covered by the lesser known Kilroys). In fact, it wouldn’t be a leap to consider red-head Rusty to be a facsimile of Blondie.  Both are attractive female characters with names that directly reference their hair color in which stories revolve around the family.

In perhaps the most intriguing bit of evidence this series was anything but another run of the mill teen humor book comes from Tom Lammers on the Atlas Tales blog. In issue #15 Rusty asks Johnny to get her a copy of a book titled “‘Always Emerald.” This was clearly a reference to an actual book published in 1944 titled “Forever Amber” by Kathleen Winsor. That book had been banned in fourteen states due to varied and numerous sexual references (yet still sold over three milling copies and spawned a movie in 1947).  There were numerous cultural references to the book by media outlets of the era including The Abbott and Costello Show  (Christmas Eve 1946) and I Love Lucy in the episode “Lucy Writes a Novel” (April 5, 1954).