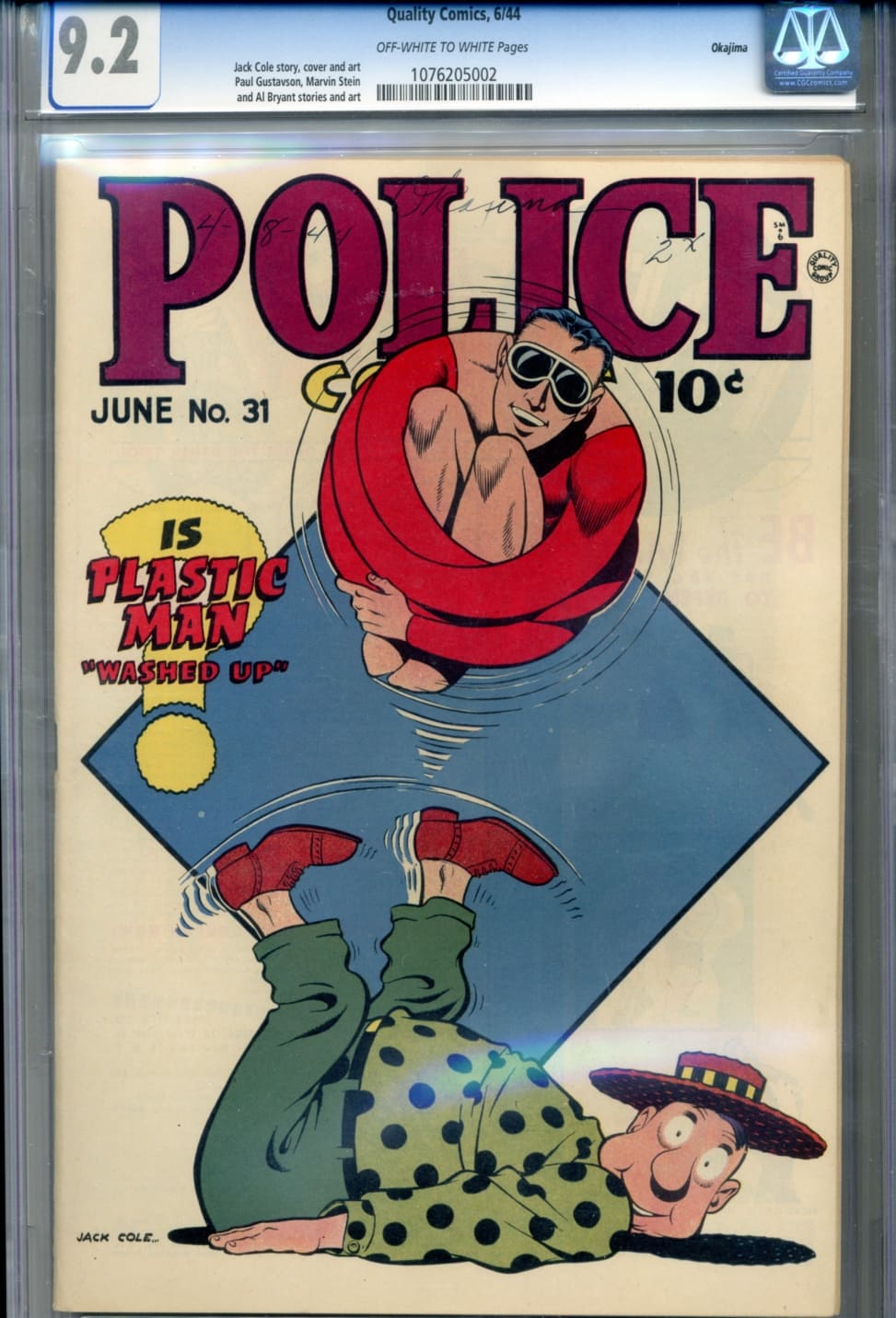 February 22nd 1944 was a typical Tuesday.  After work, a quick stop at the newsstand to scan the comic racks for something new.  Today’s purchases, a whole $0.30 worth of books – Catman #23, Police Comics #29 and Air Fighters Comics V2 #7.  After saying hello to a few friends and warmly thanking the counter attendant it’s back for a bit of reading and escapism. The pattern repeats about every three days – mainly on Saturdays and Tuesdays (never on Sunday).  Most of the time it’s just one $.10 issue, but sometimes splurging on a couple.  For a year and a half (from at least August 27th 1943 to March 29th 1945) its a ritual systematically followed.  It could be a scene from virtually anywhere in the United States of America during the early 1940’s.  But this is inside Arizona’s Gila River Japanese incarceration camp.

Pedigree comics are cherished by today’s comic collectors because of the sense of connection they give to the original owners. Today it is relatively easy to collect: internet, wi-fi, search and postal delivery – one need not even leave the couch.  But for our predecessors who lived in houses half the average size of modern homes (and typically with a multi-generational family) even space to store comics was at a premium. World War II paper drives placed added social pressure to dispose of the “waste.”  Yet a few guys and girls went against convention, holding and protecting their copies to make the hobby possible by saving what otherwise would have been lost to time.  Hence, we pay our respects to the comic collector pioneers in the form of a pedigree premium.  And perhaps no pedigree deserves more respect than Okajima.

Fast forward to 1995 and folks are lined up early outside a small farm home near Fresno California in anticipation of an estate sale.  Buyers want to get their spot as close to the front of line as possible before the obligatory 10:00 a.m. start time.  Most are experienced professional antiquers, looking for bargains to sell in their stores – be it furniture, kitchenware or gardening tools.  When the doors finally open there is an elbow to elbow rush.  Three pickers quickly find themselves gathered around a shed in the backyard.  Inside they discover decades old forgotten stacks of comic books neatly wrapped in newspaper.  Most appear to be in great shape.  Some comics, on the bottom of the stacks, display moderate impact of elements and insects. There are too many comics for one person to grab.  The three pickers rapidly agree to split up the bundles evenly between them.  They hurriedly count out and divide the packages and each walk away with approximately 375 comics.

One of the three pickers finds his way into a Campbell, California comic book shop, Heroes Comic Books. Owner Alan Bahr readily agrees to purchase his remaining books and is able to locate more that have made it onto the secondary market via the local swap meets.  He makes a detailed inventory of 340 or so books, notes the markings and creates Certificates of Authenticity for each comic in the batch.  He caringly researches the backstory and verifies the unique script written on many of the covers is by the original owner based on a handwritten note tucked inside one of the comics.  Another comic dealer, Ron Murry, is also able to accumulate a decent amount on the secondary market that he re-sells at ComicCon’s up and down the West Coast. Over the next 20 years individual copies make their way into the hands of comic collectors around the world.

It is estimated only just under 1/3rd received certificates of authenticity, and only 16% of all books are recognizable by the scripted name written on the cover.  About 55% of the collection is “lost” and unidentified among the legions of comic collectors.

Most of the pre-1945 books have “Okajima” written on the front cover.  The vast majority also include a written date with a number/letter code working in chronological order from 1A to Z, then 2A to Z etc.  The scripted fountain pen name, date and code changed to a date stamp on the front of cover between October 1944 and  March 1945.  After that Okajima’s are distinguished by recognizable front cover distributor code pencil marks (usually vertical T or F followed by a number) with the purchase date stamped or written on the back cover.

It was 74 degrees on February 22nd 1944 in the Gila River Japanese incarceration camp.  A welcome reprieve from 109-degree temperature during

summer. Residents combated the stifling heat with evaporative coolers dug into the barracks floors — some concreted the area for the dual role of a fish pond. The mesquite and cactus desert environment was quite a change from the lush California grape farms many families had been forcibly removed from. Each hastily constructed wood and fireproof shingled barrack was made to house four separate single family apartments not larger than 25 feet in length and 20 feet wide. The camp ultimately exceeded its capacity, peaking at 13,000 residents.

It was a much different life than a young lady with U.S. citizenship by birthright and a graduate of an U.S. high school would have had imagined for herself. Now age 23, our comic collector is watching out for a younger brother and a widowed mother from canal block 21 in a desert incarceration camp.

The conditions were only a moderate improvement over the temporary “assembly center” on the Turlock, California fairgrounds where many stayed from April to August of 1942.  Here there is work by day as a seamstress, sewing camouflage nets for hiding U.S. troops and equipment in World War II.  Working in the camouflage net factory pays higher wage than the farm hand, mess tent, latrine or hospital positions.

Gila River was divided into two camps: Camp One was named Canal and Camp Two was named Butte.  On December 17th, 1944 President Roosevelt suspended Executive Order 9066 via  Public Proclamation 21 in anticipation of the unanimous Supreme Court decision for Mitsuye Endo vs. the United States the following day.  It was ruled that the War Relocation Authority had “no authority to subject citizens who are concededly loyal to its leave procedure.” Those most able (property owners etc.,) began returning home shortly thereafter. The young lady’s brother (along with nearly 700 other fellow Gila River Japanese Americans) registered for the military draft.  He left his sister and mother behind to serve in the U.S. Army. Butte Camp was finally closed September 28th 1945 and Canal Camp was closed November 10th 1945.

No one knows how the young lady managed to store and protect her comics during incarceration.  Nor exactly when she returned to the central valley region of California along with her collection of comic books.  Once she returned, our heroine continued building her comic collection for another ten years accumulating more than one-thousand comics.