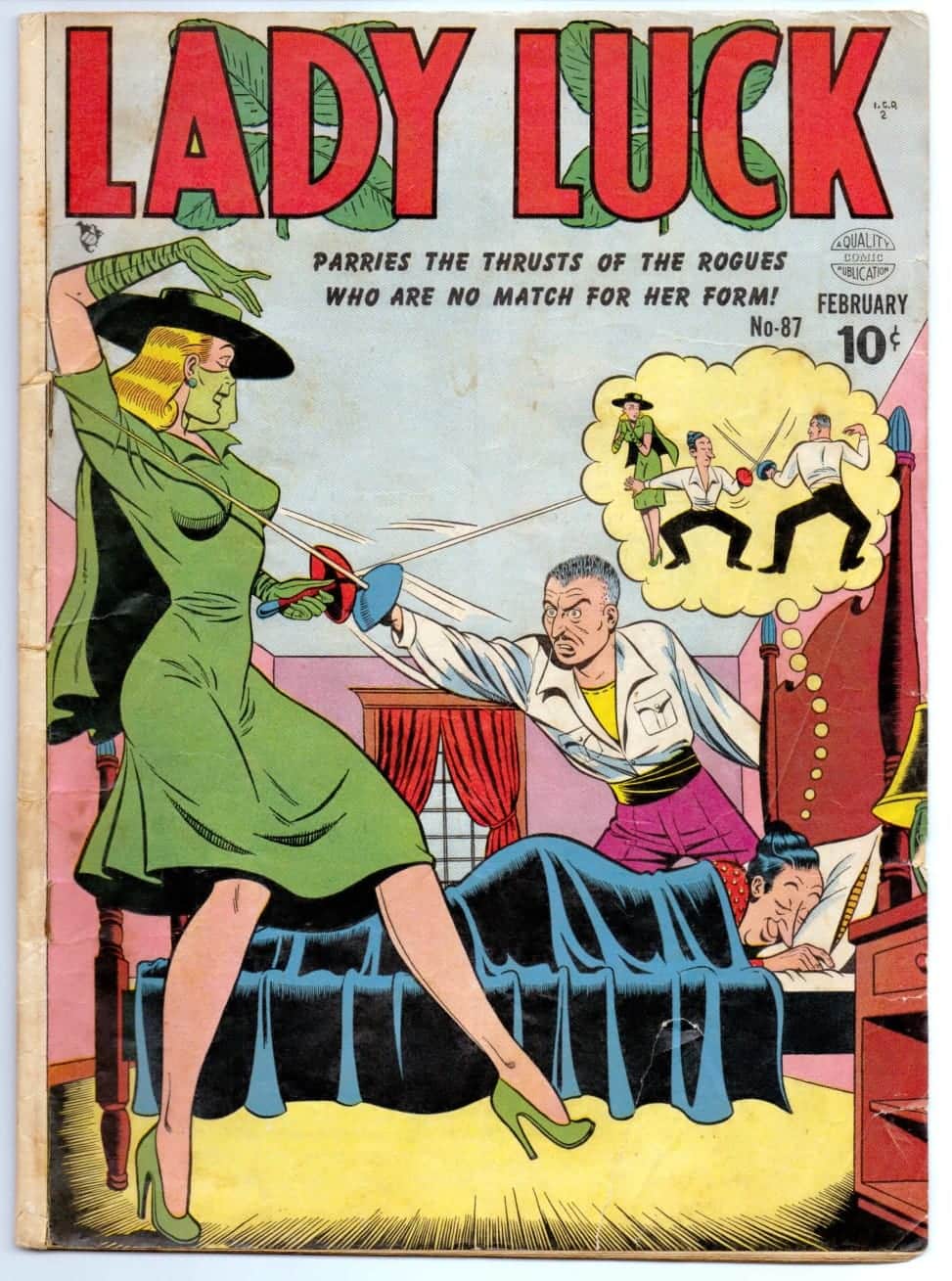 Lady Luck is an interesting title that has a number of backstories. It was published for five issues (#86 – #90) between December 1949 and August 1950. Numbering had continued from Smash Comics, where Lady Luck had been appearing inside. Pictured on the upper left is issue #89* from June 1950.  On the right is #87* from February 1950. Cover art is by Gill Fox; with inside stories being reprints from the newspaper strips by artist Klaus Nordling.

Backstory #1: Will Eisner was not just a great artist, but also a great entrepreneur. Not only did he start his own studio (creating works like Blackhawk and Sheena, Queen of the Jungle) but he also spearheaded creation of a 16-page Sunday newspaper supplement “The Spirit.” Back in June 2, 1940 (when Lady Luck first appeared in The Spirit) newspapers were the primary news and entertainment media. Nearly every household subscribed to daily delivery – some publishers printing two editions a day (morning and evening). Sunday’s were even bigger – packed with ads from every major retailer. What better way to get distribution for your mini-comic book? Lady Luck was created to fill the back half of The Spirit, splitting four pages each with Mr. Mystic.

The Comics Buyer’s Guide‘s recognized Lady Luck the comic character as the 84th in “100 Sexiest Women in Comics.

Backstory #2: 1940 makes Lady Luck one of the very first female superheroes – ever. Eisner’s team dreamt her up the same year as others created female leads known as The Woman in Red, The Red Tornado and Invisible Scarlet O’Neil.

An Irish (hence the bright green cape and veil) female version of Batman, Lady Luck was the secret identity Brenda Banks, a prosperous person about town. And like Bruce Wayne’s Alfred, only Brenda’s chauffeur Peecolo knew her secret identity. She was also at times suspected by the police as being on the wrong side of the law, yet maintained a special relationship with the “commissioner Gordon” like Chief of Police Hardy Moore.

Backstory #3: The personification of luck as a lady is itself a popular culture term and tattoo art subject to this very day. Portrayed as a great beauty along with of symbols such as dice, cards, billiard balls, horseshoes, four leaf clovers and other icons representing chance. Viewing fortune as falling for or against one like a fickle woman, who grants or takes away her favors according to whim, goes back as far as classical antiquity. The Romans recognized Fortuna as a goddess.