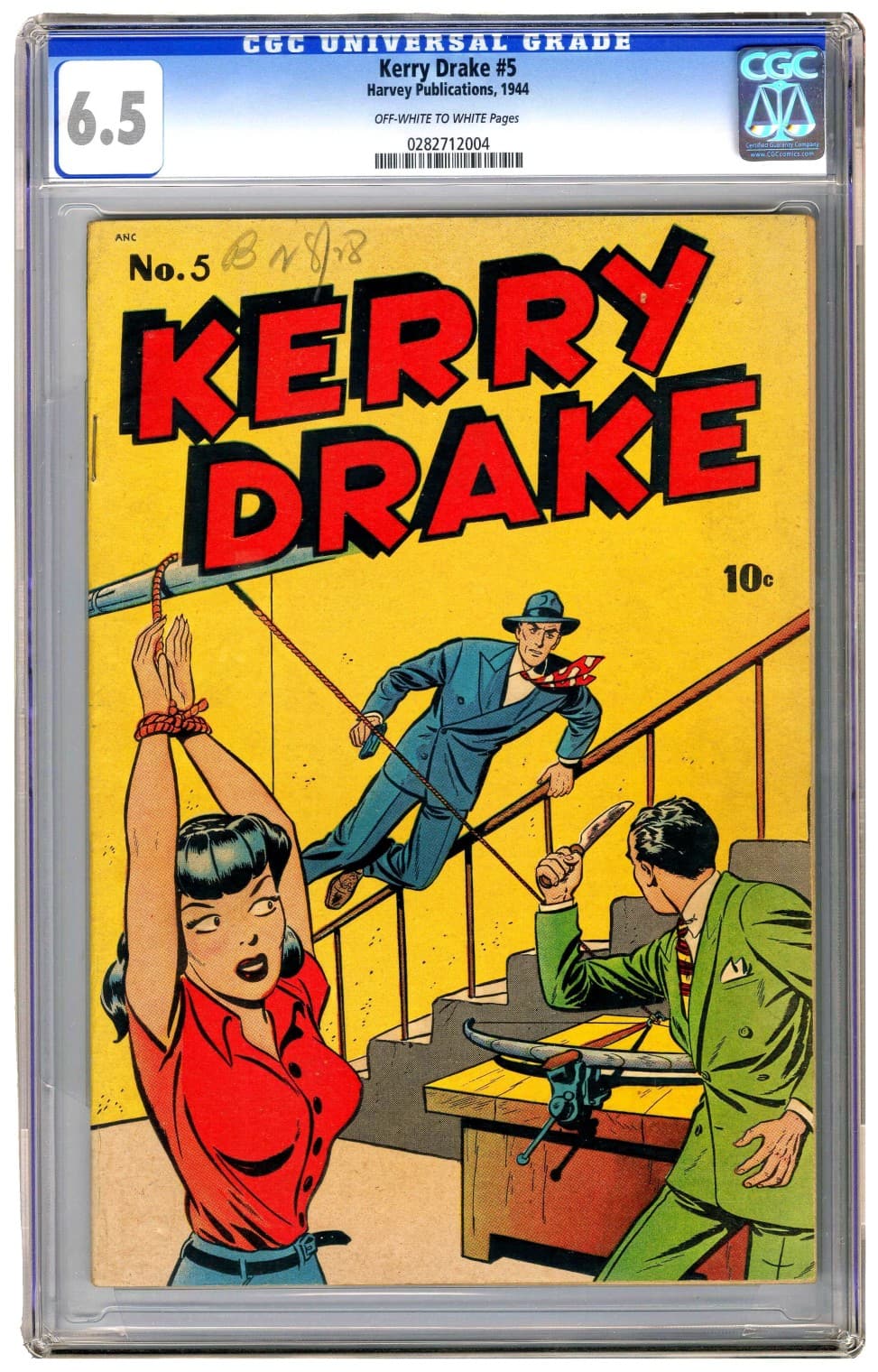 Let’s face it. Collecting comic books is a bit weird. There is no intrinsic value – like with gold or silver. It is not original artwork, like with a painting. It is a ticking time bomb of daily degrading newsprint, often of very questionable reading value.

So no, I am not a salesman for the hobby. But for some reason we collectors feel compelled to do it. Possibly to save from obscurity the media’s 15 minutes of fame, which appeared as just a flash in the grand time continuum. Which brings us to Kerry Drake Detective Cases #5* from Magazine Enterprises. Published in 1946, the cover (credited to Dave Berg) is described as a classic bondage cover. And scarcity?  Based on the Gerber Scarcity Index  this book lists a 6, that is “Uncommon. Between 50 to 200 still exist. Clearly we are getting into scarce and difficult issues to find. It is a good comic to have because demand for this comic book generally exceeds its supply.”  Assuming a circulation of 200,000, by my estimates above 200 would survive and as few as 40 would exist in roughly the condition of my copy shown here. At the time of this writing, there are no CGC graded copies in existence. The only one to have been sold at Heritage Auctions happens to also be the exact copy of the one that is now for sale on Metropolis Comics web site. There is one record of an issue being sold on eBay in the past year.

But demand?  That is a bit harder to gauge. I have no idea how many Golden Age comic collectors are out there. And specific demand for a Kerry Drake? Two collectors bidding at the same time for a high grade scarce copy – who knows. At the same time, no collectors appearing on any given day on eBay creates $0 value. The margin here at any moment can be nothing to hundreds of dollars. This is the classic definition of a “thin market.”  With a low number of buyers and sellers, prices are more volatile and assets are less liquid.  On any given day, I could have made a really poor purchase for this comic, or perhaps be proven not to have been completely crazy to have bought it.

Not yet having satisfied my Kerry Drake fix, I also grabbed these high grade “file copies” off a regular seller on eBay. They certainly are among the highest graded copies in my collection and indeed, pretty interesting covers.  These comics (#24-#26) were published by the normally tame Harvey in February, April and June of 1951.