American’s sense of adventure and exploration were popularized during the 1930’s to 1950’s in various film and book media within three genres; Jungle, Western and Outer Space. Only one, Outer Space aka Sci-fi, still retain popularity today.

In its heyday the Jungle genre produced at least 50 different “jungle siren” comic book characters ranging from Camilla, Wild Girl of the Congo to Zegra, Jungle Empress. Perhaps none were more popular than Sheena, Queen of the Jungle. 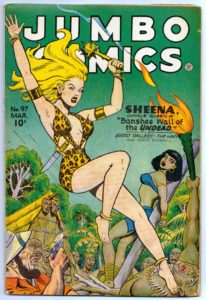 The jungle siren theme was a perfect opportunity for Fiction House to seize a marketing opportunity. First appearing in Jumbo Comics #1 with story by Will Eisner and art by Mort Meskin Sheena ran for 167 issues in Jumbo Comics starting in 1938 (just three months after Superman’s first appearance) to 1953.

Sheena actually became the first female character to get her own comic title. She even had her own TV series in 1955. In fact, poster pin-up Tanya Roberts starred as Sheena in the Hollywood “big screen” version as late as 1984. 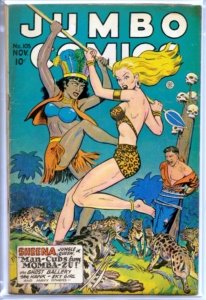 Barefoot and clad in a split neck leopard bikini this “She-zan,” Sheena Rivington was a tough but sexy female lead who was constantly saving her hapless love interest Bob Reynolds from the natives. The stories almost contain as many hyenas, spears and bondage as they do dated stereotyping. 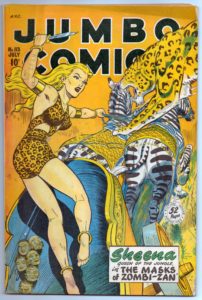 #76* from June 1945 with cover by Joe Doolin (it has been said gorillas on comic covers increased sales) includes Sky Girl story inside by Matt Baker.

#97* from March 1947 (Banshee Wail of the Undead) is by an unknown cover artist and includes ZX-5 story inside by Jack Kamen. 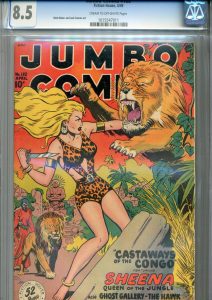 #105* from November 1947 (“cat fight” cover) is another where the cover artist is unknown and it also includes both ZX-5 by Jack Kamen and Sky Girl by Matt Baker.