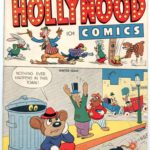 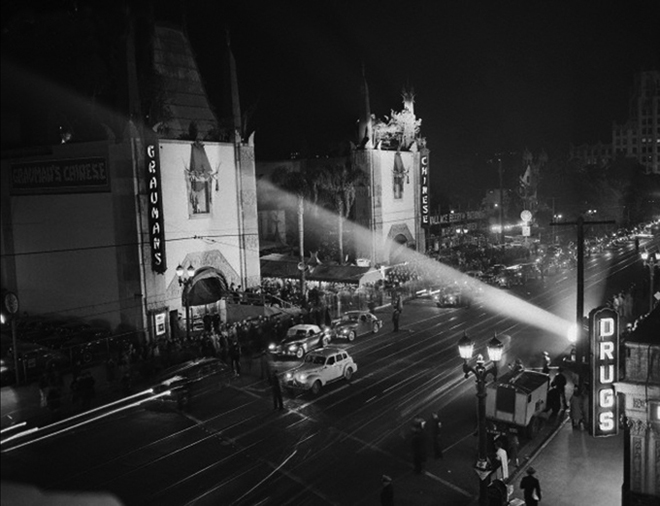 Hollywood Comics #1* was published the winter of 1944. The cover evokes Hollywood with a “Vine” street sign bringing to mind its intersections with well known Melrose Ave, Santa Monica Blvd, Sunset Blvd and Hollywood Blvd. The lights in the title are also reminiscent of signs of the era – like in this photo from the famous Chinese Theatre taken the same year. 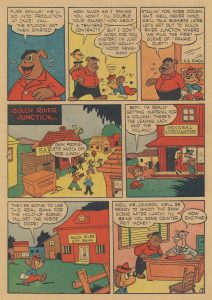 As obscure as the comic is, the cover was still catchy enough to make the front of “Classic One-Shots,” a compilation of one issue only comics  – one hit wonders if you will.

Even more obscure, if not outright strange, is publisher New Age Publishers, Inc. It only had three comic titles (Hollywood Comics, Teen Life Comics and Adventure and Young Life) with a total of six issues between them.

It is here where this odd one-off comic intersects with history in a most interesting way (like when Margie Comics took me down a path with Stan Lee to the Stork Club). 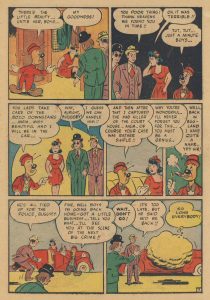 An internet search of that address finds a reference to transcripts from 1948 hearings in the House of Representatives titled “Investigation of Communism in New York City Distributed Trades.” This is a time period known as the beginning of the Second Red Scare.

Testimony from a former member of Local 65, Wholesale and Warehouse Workers Union is given about a large union meeting held in Tom Mooney Hall, 13 Astor Place, New York City January 23, 1945. What was of interest to the committee was that a flag of Soviet Russia was displayed with prominence at the gathering. 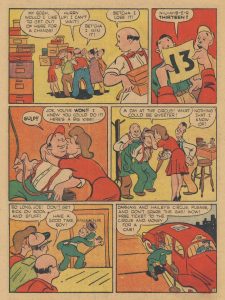 Another reference tells about Jack Henry Faulk, a CBS network employee who was fired and blacklisted from the industry based on these false charges:

“According to the Daily Worker of April 22, 1946 Jack Faulk was to appear at Club 15, 13 Astor Place NYC – a favorite site of pro-Communist affairs.”

Years later, Jack Faulk would win a landmark lawsuit that helped to end blacklisting. Apparently during the McCarthyism era just a rumor of being at 13 Astor Place was enough to end your career.

But back to Hollywood Comics.  According to the Grand Comics Database its publisher New Age Publishers, Inc. was founded around 1938 as a publishing arm of the Young Communist League (which re-formed as American Youth for Democracy or AYD during World War II).  And AYD’s Address in 1944? Yep, 13 Astor Place,  New York, New York.

The Grand Comics Database notation is further supported by a 12 page pamphlet titled The Constitution of the Young Communist League of the U.S.A., May 11-15th 1939 published by New Age Publishers. In addition, exhibits submitted by Walter S. Steele in testimony regarding communist activity in the United States, July 21st, 1947 notes:

“In the field of newspapers, magazines, and bulletins, the Communists,
Red fronts, and fellow-travelers are well represented. Some 122 such
publications have been unearthed in recent months.  They include the following…

These titles have a striking resemblance to two of New Age Publishers, Inc.’s comics, Teen Life Comics and Adventure and Young Life. 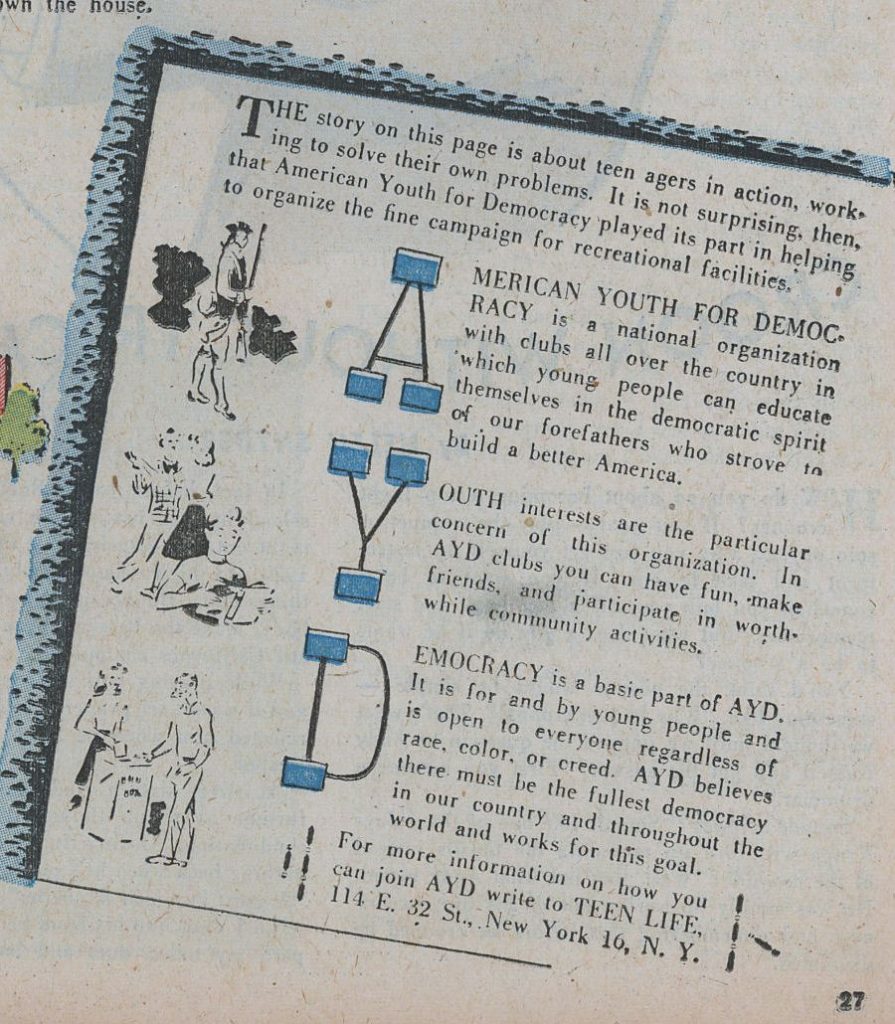 Indicias in these comics show “Editorial and Business offices are at 114 32nd St. New York 16 N.Y.”  As it turns out, this address is also referenced as the location of National Council of American-Soviet Friendship, Inc., and its publication Soviet Russia Today.  Lastly, three of the comics display as Editor Leo Rifkin, who was  an officer or council member elected at the June 1946 convention of the AYD.

Of course, after all this research it turns out the easiest thing to do would have been to  simply read inside.  Contents include an invitation to join AYD!

One has to wonder how, or why, Hollywood Comics was created.  Despite its New Age Publishers, Inc association, inside content of Hollywood Comics is rather benign (if not decently drawn) anthropomorphic animals including art by venerable Lu Guarnier and Dick Hall.  Perhaps this printing was a completely unrelated business venture?  Grand Comics Database suggests it might have been printed “as a surrogate for Lev Gleason Publications during the WWII paper restrictions.” Dick Hall did do art work in various Lev Gleason comics.

Hollywood Comics has a strong resemblance to a very similar anthropomorphic animals comic series titled Candy Comics by Wm. H. Wise & Co..  It published three issues in the exact same time frame (Fall and Winter 1944, and Spring 1945) with a similar cover design. And Candy Comics #3 also contains artwork from both Guarnier and Hall.  Wm. H. Wise & Co. itself may have also been acting as a surrogate (publishers during WWII that used up paper rations would make deals with other publishers with rations still available). Wm. H. Wise & Co. was mainly a book publisher with only four comic titles and nine total issues to its name. In 1944 they were a known surrogate for Fox Feature Syndicate, Inc.’s All Great Comics and All Top Comics. And Candy Comics has a “smoking gun” connection to Lev Gleason – both published the series “Scoop Scuttle” by Basil Wolverton.

Given Hollywood Comics doesn’t fit with New Age Publishers, Inc.’s other comics in regard to content, it was likely a case of strange bedfellows making a quick buck working around WWII paper consumption restrictions.

And AYD?  After transitioning from the labor activism of YCL to anti-facism, progressivism and social justice causes (like leading a petition to end Jim Crow segregation in the U.S. Military) it dissolved as a national group in 1949.