Really just the fifth in the series, #26* features Hedy in an ice skating barrel jump and #29* “winning” a tennis championship. They were published April and October 1948 respectively. As one of Timely Comics career girl characters, Hedy also appeared in Millie the Model, with Tessie the Typist and in various issues of Venus. Later on the series became Hedy of Hollywood.  But Hedy De Vine is not to be confused with the Hedy of “Pasty and Hedy” – that was Hedy Wolfe.

Let’s face it, these types of books were the pre-television day versions of a situation comedy.  Like any episode of “Friends,” saucy mix-ups and jealous boyfriends were formulas that still drive ratings today.  Some modern comic collectors are also attracted to the “Hey Look” filler stories inside by Harvey Kurtzman. 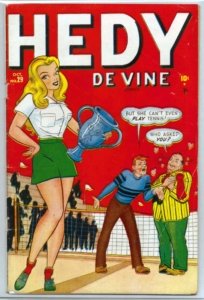 This whole series falls into that class of comics where there is no readily available information about specific artists and writers, but in general it is known that most (if not all) were written by Stan Lee and drawn by Ed Winiarski. That being said, check out the mirror image of Hedy on #29* with Annie Oakley on #3 (September 1948). One might think Hedy and Annie were the same character!  Pencil and ink credits for Annie are given to Christopher Rule on GCD. The style is pretty distinctive – someone knows the truth?