Hero “Broncho Bill” comes to the timely rescue of a brunette and a blonde respectively on the covers of issues #5* and #6* from United Feature Syndicate (January 1948 and April 1948).  Presumably, one of these country-western gals is Broncho’s girlfriend, Nell.  Both are likely being saved from the clutches of gun-fighters, rustlers, gamblers, robbers, wild injuns or bandidos.

Known first as Young Buffalo Bill, then Buckaroo Bill cartoonist Harry O’Neill carried Broncho Bill over from his newspaper comic strip that ran through the 1930’s into the comic which ran just two short years to 1950. 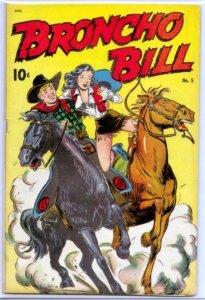